Well Saturday turned into a bit of a monster didn't it eh! Big thanks to all those that bowled on down for a boogie and of course big props go out to our guest dj Luke Unabomber who rocked it solid.

So hardly a few days have gone since Saturday and we're already salivating at who we've got coming to play at Soul Buggin' on Saturday November 24th at The Bodega Social Club. We promised you something big and we reckon we've delivered, as part of his 6 date European tour we bring you Recloose. **Please note: All limited early bird £5 tickets have now sold out so entry is  now £8 on the door**

We've been big fans of Recloose here at Soul Buggin' towers for many years and so have our crowd so we expect this one to be pretty busy.

Doors open at 11pm and as per usual musical warm up / warm down duties will come from residents Wrighty, Beane and even a rare appearance from our very own Mark A.

So a little back story on the man himself...
It all started in the spring of 1997 when Detroit native Matthew Chicoine, aka Recloose, made contact with techno pioneer Carl Craig by way of a legendary ‘demo-on-rye sandwich’. This fateful meeting led to the signing of Recloose to Craig's seminal Planet E label and the birth of an eclectic and vibrant musical career.

Recloose's musical roots trace back to eight years of studying music and playing jazz saxophone, later shifting his focus to the art of collecting and mixing vinyl while at the University of Michigan. His eclectic DJ sets, which were first heard on Ann Arbor’s WCBN, have led him to become an in-demand DJ, playing at clubs and festivals around the world as well as performing as a turntablist for both Carl Craig’s Innerzone Orchestra and the more esoteric Uri Caine ensemble.

Over his fifteen year career Recloose has developed into a true standout of Detroit’s musical litter. To date he has released a number of groundbreaking 12”s for Planet E and Rush Hour, a host of remixes for the likes of Funkadelic, Herbert, Motor City Drum Ensemble, Tei Towa, Dennis Coffey, MJ Cole and Azymuth, a live album, and three full-length LPs debuting with ‘Cardiology’‚ on Planet E / !K7 in 2002, greeted with wide critical acclaim.

Recloose relocated to New Zealand in 2001 to plant new roots and explore fresh musical horizons. 2005 saw the release of Recloose's second LP, ‘Hiatus On The Horizon’ (Peacefrog/Loop), an album that features a host of New Zealand’s finest musicians and vocalists (and spawned the dancefloor stomper ‘Dust’ featuring Fat Freddy’s vocalist Joe Dukie). This was followed in 2006 by the Recloose Live Band’s funk compendium ‘Backwards and Sideways’, recorded live at the San Francisco Bathhouse and released on Recloose’s on-off imprint ‘Fingertips’ in early 2007. Recloose’s 2008 international long player, ‘Perfect Timing’, features yet more stellar New Zealand talent (including Tyna Keelan, Rachel Fraser, Joe Dukie, Jonathan Crayford) and took out the prestigious Tui Award (aka NZ Music Award) for best Electronica/Dance album of 2008. In 2010 Recloose teamed up with long time musical comrades Rush Hour records to release "Early Works", a retrospective collection of standout and lost material from his days in Detroit. Since then he has been continued to release a number of ambitious 12"s on Rush Hour and Delusions of Grandeur.

In 2009 Recloose launched his Hit It & Quit It radio show, broadcasting with broadcast partner Frank Booker every Monday from Auckland’s George FM and quickly growing the show into one of the highest rating on the station. In 2010 Recloose took up residence at Auckland’s Music and Audio Institute of New Zealand to set up and deliver a full-time DJ and Electronic Music Production (DJEMP) programme, now rotating between teaching and securing his masters degree at the University of Auckland.

Check out Recloose's website here for mixes, productions and news www.recloose.com
Posted by What the devil is Soul Buggin? at 14:01 No comments:

The return of the bomber

Well that was one hell of a birthday party. Now the dust has settled, our livers have stopped screaming and we've put our brains back in our heads we must simply say a big thank you to all that came down and partied hard with us. Great crowd and vibes all night (pictures coming soon!) 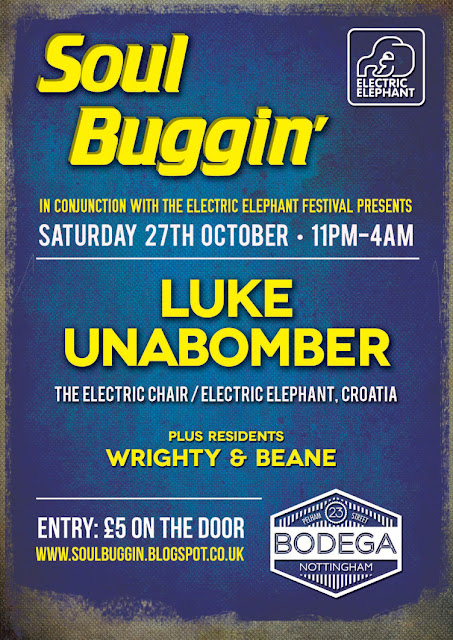 So it's about time we got stuck into to letting you know about who've we've got coming to our next party and what better place to start than with one of favourite guests who smashed it last time he played, Luke Unabomber.


Luke is one half of legendary DJ production duo The Unabombers who are best known for creating one of the greatest disco dens in the UK in the form of The Electric Chair. With guest DJs including the likes of Carl Craig, Jazzanova, Francois K, Harvey, Derrick May, Osunlade, Laurent Garnier, Danny Krivit and Moodymann the club was one of the most respected in the country.


When it closed it’s doors the ‘Chair’ philosophy was exported to Croatia and the annual Electric Elephant festival has become the ‘must do’ weekender of the summer with its infamous boat parties and stellar line ups. We can’t promise Luke will be sailing a boat through Bodega (not sure how he'd get it up the stairs) but we can guarantee some pretty sweaty party vibes so we urge you to book your place on the dancefloor early as this one could get pretty crazy.