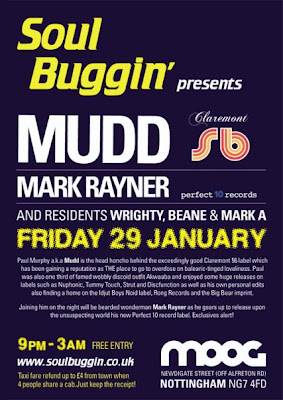 Blimey where did it all go eh? So much seems to have happened over the last 10 years since I moved to Nottingham at the turn of the century that sometimes I have to pinch myself that it's been so long. Club nights seemed to have come and gone, new venues have opened while old ones have imploded, many record shops have shut up shop, DJs have started to play things called MP3's and kids are now into new genres called 'Donk' and 'Dubstep'. Makes you ponder on just what the next 10 are going to throw up don't it?
So where do we go from here I guess should be the next question as we enter the next decade. As musical trends, styles and fashions pop up and disappear almost as quickly as they start these days I guess you've got to just do your best to focus on the things you love within this crazy scene we label 'dance music'.

Here at Soul Buggin' it's business as usual this weekend as we open up the new year with our first party of 2010, inviting Paul "Mudd" Murphy and Mark Rayner to that beloved late night den of filth that is Moog. For those not aware, Mr Murphy is guy behind the rather splendid Claremont 56 label that for years has been putting out some fantastic left-of-centre-disco-not-disco balearic-style sounds. With each release normally super limited many have escaped my clutches which is mainly down to the fact that (a) I'm too bloody lazy to get my arse in gear to purchase them quick enough and (b) the disco beards are on them these days quicker than Janine Butcher on Archie Mitchell's last will and testament. Joining Paul will be Mark Rayner who gears up to release his new label Perfect 10 on the unsuspecting world. I was fortunate to be given some exclusives and dropped one of these tasty morsels on my weekly sunday radioshow last week. You can listen again here: www.beane.podomatic.com

We kick things off from 9pm and go on through till 3am. It's a freebie so get down and shake off the excesses of the christmas period. Oh and grow a beard and bring a notebook. That goes for you too ladies. It might be one of those sessions.

Beane
Posted by What the devil is Soul Buggin? at 05:51 No comments: