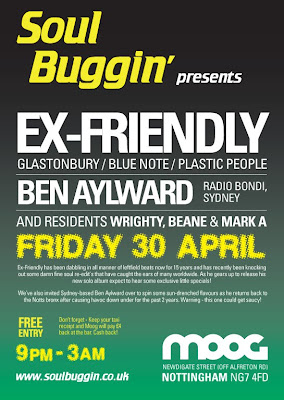 Well, have you recovered from the monstrous Soul Buggin' vs. Basement Boogaloo party yet? No we haven't properly either. A fantastic 11 hour party that started sensible and serene but then got all kinds of wobbly. Nick 'the sarge' Shaw sends his apologies for his no show as unfortunately his serious work commitments dictated he couldn't attend. A real shame but rest assured the disco sexual psychopath will return soon. Special thanks to our other guests on the day John "I am the law" Buckby and "Evil" Ed Challands who both played blinders.

So just around the corner here in Nottingham are the Bar and Club Awards at The Pitcher and Piano and would you adam and eve it our little Soul Buggin' soiree has been nominated in the "Best Independent Club Night" category. We think someones been on the wacky backy again but we ain't gonna argue as we think we're worth it. We may be small, a little wobbly on the feet and smell of booze occasionally but we have thrown some belting parties these last 12 months so if you've got a spare minute (and of course you like what we're doing) could you pop over to the site and drop us a vote in? Would be much appreciated! We'll also be in charge of the music at the awards themselves on Monday 10th May alongside The Cuban Brothers and local web radio godfather Alex Traska so it should a be a right old knees up. Here's the website to cast your votes: www.nottinghambarawards.co.uk

Right - what's up next then? Well Friday April 30th see's us back at Moog as we welcome special guest Ex-Friendly to the turntables. He's been been dabbling in all manner of leftfield beats now for 15 years or so and has recently been knocking out some damn fine soul re-edits that have caught the ears of many worldwide. As he gears up to release his new solo album expect to hear some exclusive little specials! Go have a listen on his sound cloud page for some heat: www.soundcloud.com/ex-friendly. We’ve also invited Sydney-based Ben Aylward over to spin some sun-drenched flavours as he returns back to the Notts bronx after causing havoc down under for the past 2 years. Lord knows what the sunshines done to him but one thing we can confirm is that he's pumped up for this one big time. Advance warning - this one could get saucy.

Keep your eyes peeled to this page over the next couple of weeks where we'll be giving you more info on our big summer bank holiday party in May. We'll tell you now, it's going to be a special one.

Beane
Posted by What the devil is Soul Buggin? at 10:59 No comments: