As some of you may already be aware, here in Nottingham each year the cities pubs, clubs, promoters, staff and general sauce monsters all come together to celebrate the cities nightlife in one almighty piss up. It's been going a few years now and last Monday the big event was held at the Pitcher and Piano bar in the centre of town. As mentioned in my last blog by some strange act of madness Soul Buggin' was entered into the "Best Independent Club Night" category. We were up against some pretty big players and didn't really expect to do that well but I was personally chuffed that on the night we managed to take 3rd prize which considering we're not really a student night (c'mon - the average age of our punters must be somewhere in the 30's!), play music that kids don't really 'get' and generally do it all for a bit of a laugh ain't that bad is it really. Disco may not be such a dirty word here after all!

Anyway, we were also honoured to be supplying the music for the night (and after party at Brass Monkey) alongside MHYH's Alex Traska and The Cuban Brothers. I'd never been to one of these events before so it was nice to dust off the old whistle and flute and raise a glass to Nottinghams nitelife which if truth be told has taken a bit of a battering of late with all these closures and takeovers. The night ended as usual in some god awful late night takeaway shop with me nearly knocking myself out running into a glass door but I'll save that story for when I next see you. 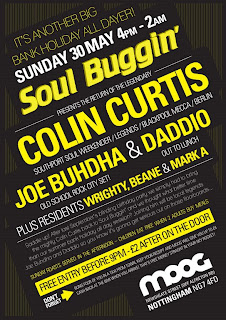 So, with a renewed confidence in our step all eyes turn to our summer bank holiday party @ Moog on Sunday 30th May. Our last all dayer was pretty special so we thought sod it lets do another and this time we've invited the legend that is Mr Colin Curtis. Those of you who reached our birthday party in September will remember the scenes this man brought to Moog so it is a pleasure to have him back. On the day he'll be doing two different sets - an early doors and peak time one - so it'll be well worth your while getting down early. If that wasn't enough incentive then we've also got old rock city head Joe Buhdha and jazz dance mover and shaker Daddio supplying the sounds. Backing up that little lot will of course be the usual rag tag bunch of hairy residents Wrighty, Mark A and myself. We roll from 4pm and it's a freebie before 9pm and only a mere 200 pence afterwards. Should be good un we reckon.

On that note I'm gonna do one but before I depart breaking news has just come into the Soul Buggin' HQ. No, it's not regarding some slimy posh tory boy but infact something much more entertaining all about a very important appointment. Soon Soul Buggin' will be moving to the last Saturday of the month (rather than friday) so now we really can go hell for leather and let rip. Saturdays were invented for disco anyway weren't they?

Beane
Posted by What the devil is Soul Buggin? at 05:45 No comments: