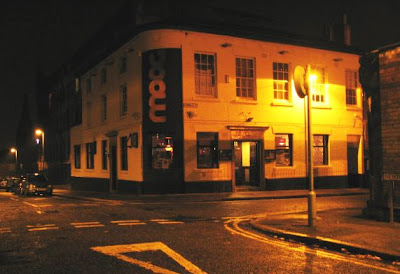 With the imminent closure of Moog in a few weeks time I felt compelled to put down a memorandum, a few words, thoughts and feelings before we have our last Soul Buggin' party at the venue on New Years Eve as it gears up to close its doors in January. I guess I do it partly to shine a bit of a light on a place that needs putting on a pedestal for reasons I shall go into but also (and more importantly) so when future generations look back upon the blandness of Nottingham in years to come, no doubt viewed through a usb memory stick plugged into their central cortex, bored with the nonsense that a night out in the city centre on a Saturday night will no doubt involve, they may just ask the question "was Nottingham always this shite?"

The simple answer of course is no. We can all reminisce of the bygone days of classic clubs and weekenders till the cows come home that this city has been responsible for but that's not what this short tale is about. Lots of stories of good times have already been documented regarding the nightlife of Nottingham but few words have been put down on paper that particularly concern the madness of a certain little boozer in deepest Radford and the effect it had on many people who entered through those double doors.

I always found trying to explain Moog to people who had never been quite a comical endeavour, especially if the person in question was used to being dazzled by the more prominent glittering swanky bars of the city centre. In a nutshell I guess I best described it to new comers as a pub that was a bit bigger than your flat, had a bar in it, a few wonky taps, smelt very odd in places but more importantly felt safe, recognisable and a bit like a house party where even if you went on your own you'd leave with new friends, partners or as was the case on many occasions, a new carer. However to get straight to the point the best two words to describe this little adult youth club of unadulterated fun was quite simply 'rave pub'. While many late night sauce dens and boozers may attempt to label themselves as such due to their newly extended licenses they would be wholly and foolishly mistaken. The manager, the staff or djs do not decide if you are a rave pub. Your punters do and with Moog they most certainly did.

With it being situated on the outskirts of the city centre it tended to attract quite a few unique characters, the sort of people of all ages and from all walks of life that once upon a time you would of possibly met in the dark confines of back room way back when this city had a beating club pulse for more discerning sounds. You'd often have bugger all in common apart from the fact you both despised the rigmarole and rammell that a standard Saturday night in Nottingham involved. They'd of probably found their way to Moog much the same way you had on your first visit; namely being bundled into a taxi from town with friends, not having a clue where the journey was to lead but had been promised the pub was 'quite a laugh'. These very people who frequented Moog would never need much encouragement to let their hair down or chat nonsense until the sun came up despite hardly knowing you.

It was for these very reasons why we chose Moog for the home of our Soul Buggin' parties some 3 years ago. It just seemed to tick a lot of boxes, it had a dance floor for starters that could be as big or as small as you wanted, the staff and manager were sound as a pound and the punters would always come with an open mind and in most cases with an expectation of musically being served up something a bit different. When we decided to start inviting djs and producers from outside the city who had never been to Moog before we hoped they would understand the vibe, the crowd but more importantly why we chose to ask them to play to a room full of only 100 or so people when many of them were used to audiences several times that. Pretty much all of them got it instantly, often leaving buzzing with a smile from ear to ear (although a lot of that might of been the copious amounts of booze Moog had fed them as a warm welcome).

When I heard the news regarding its closure in January I was properly gutted, not just from the point of view as a promoter of a night that would have to find an alternative venue but more as a punter who over the years has had so many blinding nights under that roof. Unfortunately my brain cells have been subject to much mangling in that venue and I have been finding it hard to fully recall all of the episodes I've experienced but I think that's probably a good thing. Moog for myself and countless others was the very symbol of debauchery in Nottingham but luckily for us all walls haven't learned to talk just yet. Phew.

So Soul Buggin' will be packing up its bags and moving on in the new year and although we're looking forward to hosting our last party at the venue on 31st December I'll be surprised if there's not a tear or two come closing time. What time that will be will be anyone's guess as like everything in Moog, you never quite know what is going to happen but one thing will be certain, Nottingham will be a poorer place without it.

Thank you Moog for the memories, the silliness, the mentalism, the headaches, the stresses and the randomness but most importantly thank you for being different from everything else.

For full details of our New Years Eve party please read below. We look forward to having one last boogie with you. 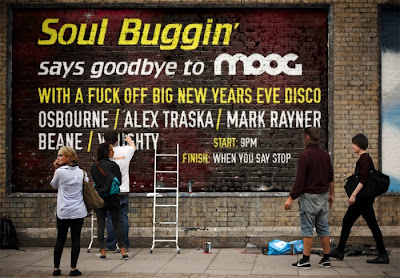 Posted by What the devil is Soul Buggin? at 09:05 No comments:

Big ups to all those that came down to see Mr Duckenfield last month at Soul Buggin'. After the usual party dramas it soon turned into a firing one in the end so we hope you enjoyed it as much as we did (that is apart from poor old Wrighty of course who was nursing a busted up foot but still managed to turn up, crutches in tow, until people started to use his broken digits as a dancefloor. Ouch!)

So is it December already? Ruddy nora that went quick. What happened to 2011 then? That's been one hell of a year. It's around this time that I like to take a good look back at the last 12 months, both musically and at some of the parties we've put on (if I've still got the brain cells left to remember them) and reflect a bit but sod that we ain't got time. We'll have to do that in a few weeks as we ain't done with you this year just yet cos we've got 3 more Buggin'-related sessions planned before we wave off the beast that was 2011. So, get some of these in yer diary and come and raise a glass with us in the party season. 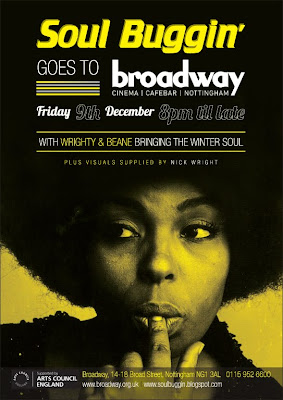 We bomb down to the Broadway cinema on Friday 9th December for something a bit different. Wrighty and myself will be providing the sounds in the main bar area accompanied by some swish visuals from Nick Wright. We'll be rolling from 8pm till late. 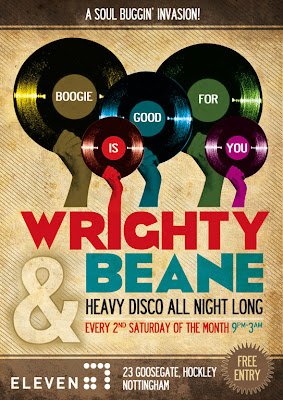 Our last monthly knees up of the year down at Eleven in Hockley will be on Saturday 10th December so expect the usual 6 hours of Buggin' nonsense but with added mistle 'broken'toe and christmas edits galore. 9pm-3am. 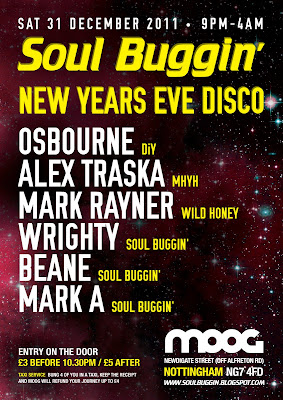 And to bow out of 2011 with our hands in the air we've put together a line up of some of our favourite local djs and Soul Buggin' regulars for a bit of a big end of year knees up at Moog. Doors open from 9pm and we'll be going on till at least 4am. As an added bonus we don't believe in going silly with the door prices so it'll be the same entry as usual but we'll ALSO be chucking in a free buffet of nibbles and jazz snacks for those who come down early doors. Now hows about that then eh.

Come one come all. Party over here.

x
Posted by What the devil is Soul Buggin? at 12:16 No comments: