We're sitting here still basking in the glow of another excellent Soul Buggin' night where Chris Duckenfield showed again why he is one of our favourite DJs. So what do we have to match up to that, well we've only gone and booked the rather bloomin' excellent Maurice Fulton. 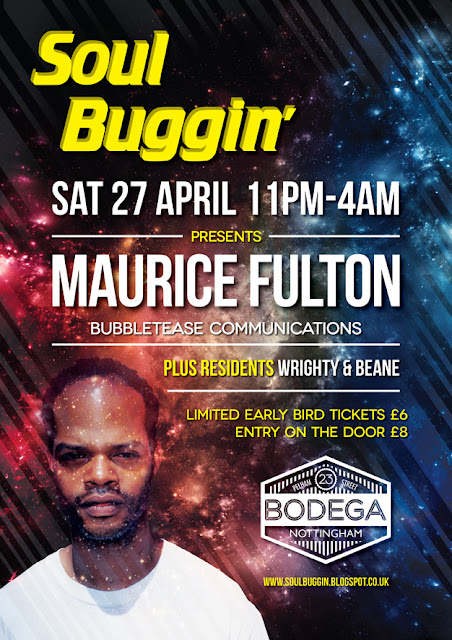 Having been looking at booking him for ages we're rather delighted to be bringing him as part of our big spring line up. There is already a buzz about this one and we are selling advance tickets for this, so make sure you pick one up to avoid any disappointment.

Maverick production genius Maurice Fulton is a man of few words, who is more inclined to let his music do the talking. We know for certain that he comes from Baltimore in the USA and has been DJing since his early teens. Starting on Hip-hop and then moving on to House and Garage at various residencies across the US he played under his nickname Dr Scratch.

Maurice began playing organ in church and drums in high school. So when he put his talent to making music it wasn’t long before he was using his skills to produce tracks with The Basement Boys and Ultra Nate. His most famous work was heard on Gypsy Woman by Crystal Waters, one of the most successful house tunes of the early ‘90s.

Maurice went on to become highly prolific in his production work releasing tracks on various labels through the 90’s including Nuphonic and Warp in the UK. Often linked to contemporaries like Carl Craig, Derrick May and Frankie Knuckles, his textured sounds and complexity of production astounded many and grew him a loyal fan base. Some called it weird house others arty disco, his left of centre productions was always on the money.

In his more recent years he has been working for Tirk, Kathy Diamond, DFA and Running Back. Maurice likes to be known first and foremost as a producer, though for those in the know Maurice is also an extremely accomplished DJ. His sets are firmly routed in Loft and Garage classics that gave New York City its clubbing heritage. These tracks are often quietly edited to perfection by his own hand, and presented and eq’ed to maximum effect on the floor.

Maurice Fulton is one of house music’s true originals and his enviable back catalogue will live long in a modern world of disposable downloads.

Advance tickets are £8 (available from The Bodega)

Posted by What the devil is Soul Buggin? at 07:24 No comments: