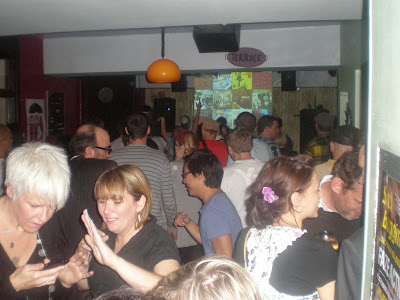 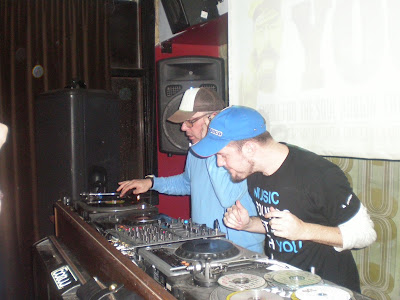 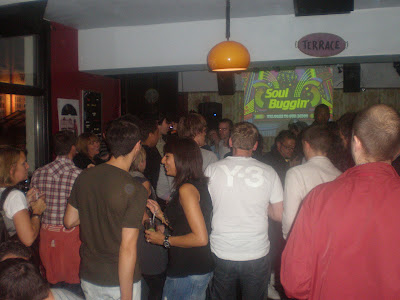 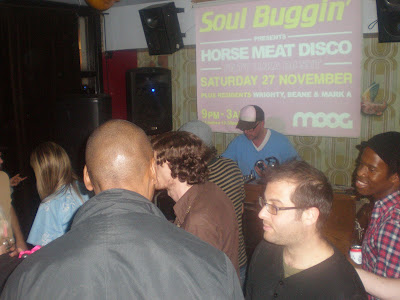 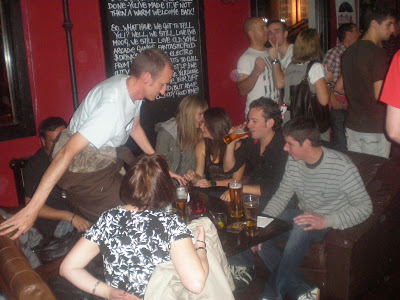 The aftermath of a big birthday party normally means some major hangover action for me that lasts well into the start of a new week, almost guaranteeing I'll be trying to scurry into some dark hole but surprisingly as I write this on a cold and gloomy monday morning I feel pretty good which must surely be a world first. If I'm honest I'm still buzzing from the Saturday just gone and refuse to let the extended hangover take it's deathly grip.

Here in Nottingham on Saturday 25th September our Soul Buggin' collective threw a big party to celebrate our 6th year in the game. It doesn't really feel like 6 years due to the sporadic nature of our early years of putting on nights but anyway all that was explained on here in last months ramblings. We were dead chuffed that our guests Simbad and Charles Webster came down to raise a glass with us and boy did we all celebrate. With a great crowd turning up in force come midnight Moog was rocking proper as Simbad and Charles played a blinding back to back set for the best part of three and a half hours. Dropping everything from deep house cuts, hip hop jams, latin shufflers, broken beat grooves, old school anthems, brass band covers (how good did that "Good life" version sound!?), lots of their own exclusives and even a splattering of drum and bass near the end we thought they well and truly smashed it. A massive thank you to them both for coming down to play but an even a bigger doff of the hat to all of you lot who came down and shook a leg. You created a fantastic little party that makes all the work behind the scenes worthwhile. 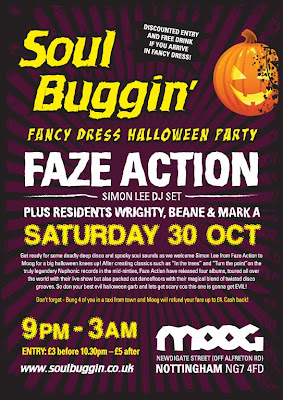 So here we are then. Slap bang knee deep in winter with it's dark nights and even darker mornings creeping in but we urge you not to get your grump on just yet because we've got a great session lined up for you on Saturday 30th October down at the Moog bar. As it falls on the weekend of halloween we've decided to throw a fancy dress-themed party for a bit of a laugh and we've invited down Simon Lee from Faze Action to come and get all scary with us. Now the state we've seen some of you lot get in at Moog before you probably won't need to dress up to scare the bejesus out normal god-fearing folk but for those that do decide to don your evil attire you'll get discounted entry plus you'll get a free drink on arrival as Dave is gonna boil up a nasty cauldron of his legendary potent punch to get you creepy.

I've been a fan of Faze Action since I stumbled upon the track 'In the trees' in the mid to late nineties that came out on that brilliant UK label Nuphonic and soon began collecting everything I could. It totally blew me away on first listen and their first album 'Plans and designs' that it featured on was a massive influence on me and still gets regular plays in my sets. Since that first album they've taken their show on the road with live performances at numerous festivals and events around the globe as well as some firing dj performances at the more discerning club nights out there. In the weeks leading up to the party I'll be playing some of my favourite Faze Action productions and remixes over on my weekly internet radioshow 'The Noodle Hotpot' (every sunday @ 2pm-4pm on www.myhouse-yourhouse.net) so be sure to tune in if you'd like to hear some of their back catalogue.

On the night itself the usual rules apply - 9pm till 3am with resident spooky Soul Buggers Wrighty, Mark and myself warming up proceedings (hopefully looking scarier than normal) and entry is £3 before 10.30pm and £5 after (but remember you'll get in for cheaper if you've pulled your finger out and got dressed up!)

We look forward to getting our freak on with you and I'll leave you with a little chart of heaters I'm currently feeling fresh from the box this month - some old, some new, some soon to drop.