Christ it's another Derby invasion!!! 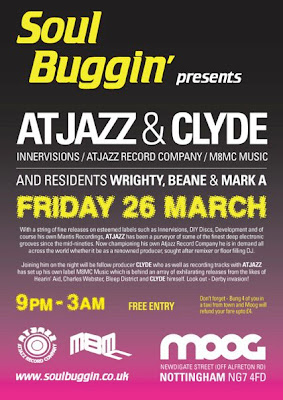 Springtime is upon us! So let's not muck about in March....

If you cast your mind back to last August you'll remember we hosted a little Nottingham launch party for the new DUCK album which had just been released upon the unsuspecting world courtesy of some of Derby's finest producers through the M8MC Music label. We were fortunate to have some of the albums contributors come over and play at Moog but one artist who unfortunately couldn't make that night was Atjazz. I've long been an admirer of Martin Iveson and if truth be told I was a little gutted he couldn't make it.

But all was not lost. A plan was hatched. Fast forward to March 2010 and we've been lucky enough to twist the arm of Clyde (M8MC Music boss) to return to Moog on the promise he kidnaps Atjazz and brings him along for the ride! Friday 26th March is the date we've locked down where we'll be welcoming those deep electronic Derby souls to Soul Buggin' and we'd love if it you could join us for what will be a rare opportunity to see both Atjazz and Clyde on the same night here in Nottingham and all for nowt too.

As a bit of a warm up for the main event on my radioshow this coming Sunday (21st March 2pm-4pm on www.myhouse-yourhouse.net) I'll be pulling out some of my favourite productions and remixes from the pair that I've been lucky enough to collect over the years. Some classics mixed in with some lesser known tracks you may or may not not have heard of before. The show will be available to listen again should you miss it over on my podcast page (www.beane.podomatic.com)

Don't forget doors open at 9pm on friday and as per usual we'll be going through till 3am.

See you down the front

Beane
Posted by What the devil is Soul Buggin? at 13:14 No comments: