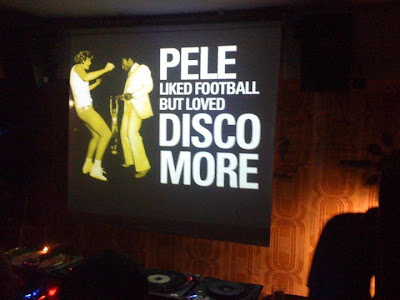 A few weeks ago our humble little Soul Buggin' soiree decided to have a bath, comb the old barnet, pull its socks up, put on some nice slacks and hop on over to our first Saturday night residency at the Moog bar. After a good 18 months or so of doing some smashing Friday nights we'd talked about moving for a while and July 31st saw our re-launch party as we welcomed the man behind the ace Million Dollar Disco nights Al Kent as our guest. Strangely, the people who complained that they couldn't come to Soul Buggin' on fridays due to work etc actually decided, rather perplexingly, not to show but that didn't matter a jot. With loads of new faces deciding to come down it turned out to be a great little party with Al firing on all cylinders laying down special edits and string-drenched percussive bombs a plenty. Many djs claim to play disco these days but very few actually REALLY play disco so it was a pleasure to hear a true ninja at work! Big ups to those that came down and got down on the floorboards and a special thank you to Mr Kent for making the long tortuous train journey down from Scotland to Nottingham. All those that missed it, well, we did warn you. We shouldn't really have to tell you that disco is about actually dancing and sweating, not posting youtube clips up on facebook! 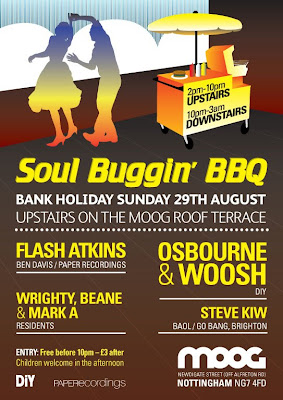 So in this country we do have a tendency to moan about a lot of things and what with the usual world cup and wimbledon woes well and truly over (blimey how bad was that?!) one thing I think it's safe to say is that we can't really grumble too much about the old weather this year. Being as skint as Shadrach Dingle in Emmerdale's Woolpack boozer on a saturday night, this summer has meant I've missed out on the usual croatia shenanigans and UK festival adventures but the pain has been somewhat dulled by the blinding summer we've had so far. These past few months the suns decided to smile on us for a change and I'm loving every minute of it. So, to nervously tempt fate we're deciding to throw a big all day 13 hour bbq up on the roof terrace of Moog on Sunday 29th August. For the past 5 years it's been almost traditional to get proper wonkered at either the Backyard Boogaloo or Boatyard all day events (at The Nags Head or The Canal House respectively) but this year they've decided to take a year out so we thought we'd step into those very big boots after hosting two successful big bank holiday parties earlier this year in April and May. We've only got small feet but for this party we've pulled in some big guns....

Ben Davis aka Flash Atkins is the man behind huge labels like Shaboom, Blaktrax and more importantly the legendary deep house label paperecordings which pretty much changed the game completely in the mid-nineties. Having djed all over the bleedin' shop for the best part of two whole decades from The Ministy of Sound, Plastic People and The Sub Club and beyond you may remember him from last years Bobstock event but for those that missed him we've invited him back to Nottingham.

Joining him on the day will be local luminaries Osbourne and Woosh from the DiY party collective. Those in Nottingham shouldn't really need any introduction to these guys other than you can take it from us they bloody well know what they're doing when it comes to laying down serious tunes.

Backing up the rear (oo-er) will be wobbly residents Wrighty, Mark A and myself but we've also asked Brighton's most balearic export Steve Keep It Wheel to come up and make sure I don't play too many dodgy 80's re-edits.

We'll be kicking things off at 2pm upstairs and will be going through till 10pm when afterwards we'll all bomb downstairs till 3am to get our groove on good and proper. It's a freebie in the day with a small £3 charge for those that decide to come down afterwards. It's also worth a mention that kids are very welcome till sunset so no need to book in that expensive babysitter.

Oh and don't worry if the weather decides to get it's grump on, we'll just stick two fingers up to it and leg it inside with our sausage sarnies.

We look forward to seeing some of you nutters at the end of the month!

PS - It's our big birthday next month and we want to tell you who we've got booked but we can't yet for fear of you having a heart attack and we need you all nice and healthy for bank holiday. All will be revealed soon!
Posted by What the devil is Soul Buggin? at 04:39 No comments: