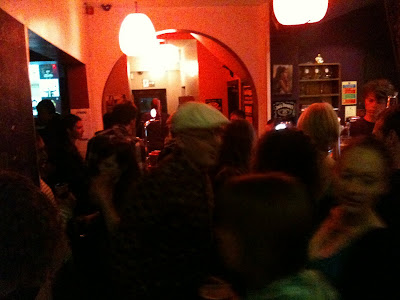 So is that the end of the summer? Blimey that went quick didn't it? I guess I should of known better really than to tempt fate in my last blog entry singing the praises of the great british summertime, especially as we were planning an all day party up on the roof terrace at Moog. Before we knew it August bank holiday Sunday was soon upon us and as many decided to venture down to carnival in that big crazy old London town to indulge in a bit of 'how many humans can we get in one street' game (followed by the popular pastime of 'how long can I hold the contents of my bowel in before it starts coming out of my ears') back up here in Nottingham it was all go for our big Soul Buggin' BBQ. We knew it would be too good for the weather to behave itself and with the wind trying to do a silly impression of Hurricane Katrina we opted to do the whole shebang inside Moog. A slight shame but not the end of the world - this was going to be a 13 hour party after all - come 3am we probably wouldn't be able to remember the name of our mothers let alone worry about the bleedin' weather. We'd invited DiY nutters Osbourne and Woosh, Flash Atkins (from the mighty Paper Recordings stable) as well as balearic assassin of love Steve KIW to join us but also chucked on old Fun Your Ear favourite Dave Pickering who came down from Manchester and before the Eastenders omnibus had started we were off.

With enough kids in the afternoon at one point to nearly open a fully-licensed creche things started nice, serene and sensible before the sun called it a day, the BBQ got packed away and it was eyes down, no talking at the back, nothing in this game for two in a bed. No, we didn't just suddenly have a game of bullseye but more importantly get on the good foot and start raising the tempo as people started to pour in from their bank holiday pub crawls. Messiness ensued as usual and a huge thank you to all our guests but more importantly you lot who drank, danced, bantered and boogied. That's 3 massive bank holiday parties in a row! Superb! 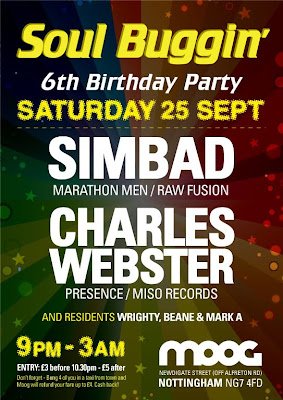 I can't believe we're slap bang into September already. It only feels like a few months ago that we had the legend that is Colin Curtis come over to celebrate our birthday last year (and how big was that session!). I've been doing some calculations to try to fathom exactly how old Soul Buggin' is and if we want to be all proper about things it turns out that this month we're six years old. SIX?! How the hell does that work out? Well come with me on a magical little journey through the dirty kebab-strewn streets of Nottingham for the back story....

Back in 2004 I'd decided to call time on my monthly Noodles night down at Bar None as all manner of madness was going on (another story in itself!) but times were changing for me as I'd just come out of a crazy relationship, was feeling a bit lost, felt extremely thirsty for free beer but most of all really liked the idea of locking down a proper weekly residency to play out the thousands of records I had collected but never really played out. Luck would have it that a random encounter with a bar manager (who I'm reliably informed was probably on drugs at the time) offered me a weekly spot at Bar Humbug (just off Friar Lane, Market Square) and I gratefully accepted. Running every friday night for 5 hours each week we consistently pulled in some great crowds who didn't like the idea of fighting in Walkabout but rather sup away with the sounds of Roy Ayers, 4 Hero, Jazzanova, Jill Scott, MAW and Moodymann pumping into their lugholes. It soon became apparent that this session needed a name, a theme and some branding so I came up with the concept of Soul Buggin'. A name that everyone in the bar kinda liked and after all, it seemed to fit in well with the venue.

A year soon passed and I was on fire. More drunk than ever on free booze, wearing the best threads, perving on anything that couldn't run away but more importantly was buying enough music each week to sink the titanic - I simply couldn't wait to play all this heat out at the weekend. Then disaster struck - with no warning I was told the bar was being sold. Ok I thought, this might not be the end of the world, I might be able to stay as all bars need a DJ right? Yes, all bars do unless your a strip club. Bugger. With the surreal experience of playing one last night while the strip club was open (next level mentalism) I was soon out on the streets and Soul Buggin' was homeless.

All was not lost though as a few months later fellow soul heads Wrighty and Mark A (who I'd randomly met through, erm, Norman Jay's message board some months before) put together the idea of forming a collective all based around a website where we could host mixes and the like. It seemed like a good idea and before long we were off messing up the internet with our musical nonsense with aplomb. As the years passed we decided to put on some one off bank holiday events coupled with a few christmas parties down at The Snug Lounge (once even challenging local disco lords Basement Boogaloo to a dust up) and also started a monthly residency at The Loft. Soon bad luck was to strike Soul Buggin' down again with yet another closure (I was starting to feel jinxed by this point) but as one door closes, another opens as they say and so it did. Enter the Moog.

I guess the rest is history you could say. Over the past two years at moog we've invited a long list of DJs to play with us from local spinners Red Rack'em, Fran Green, Alex Traska, Daddio and stacks of others through to DJs from afar such as Benji B, Domu, Kev Beadle, Colin Curtis, Al Kent, Mudd, Atjazz & Clyde, Scrimshire and so many more. Now as we celebrate our 6th year we thought we should do something special and go big style.

So on Saturday 25th September down at Moog, Newdigate Street here in Nottingham we've invited Simbad (Marathon Men / Raw Fusion) and Charles Webster (Presence / Miso Records) to help pop some party poppers with us. Both DJs are well respected not only behind the decks but twiddling the knobs on the various fine productions they touch and you won't really need me filling you all in on their individual sparkling careers - you lot are a pretty clued up bunch!

Kicking off at 9pm and going through till 3am (and due to the limited capacity) we recommend you get down early for this one and reserve your place on the floorboards (plus it's cheaper entry - £3 before 10.30pm / £5 after). Moog is a very intimate place after all but we kinda like that and always proves to be a great party.

We look forward to raising a glass with you to celebrate our birthday!

PS - On Sunday September 19th I'll be broadcasting a 2 hour tribute to our guests on http://www.myhouse-yourhouse.net at 2pm where I'll be selecting my personal favourite productions, remixes and edits from both Simbad and Charles Webster to get us all in the mood for the following Saturday. The show will be available as a download incase you miss it here >> http://www.beane.podomatic.com
Posted by What the devil is Soul Buggin? at 04:44 No comments: