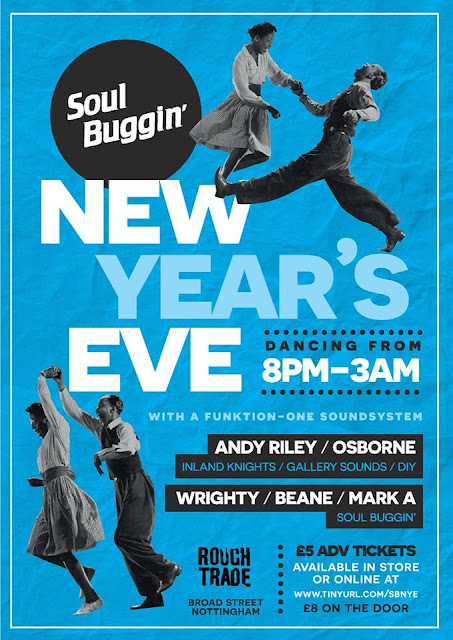 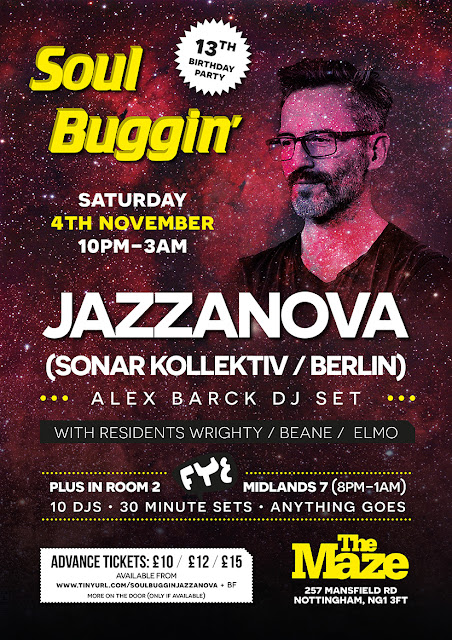 We're celebrating our 13th birthday with a massive 2 room party at The Maze in Nottingham and you're all invited. For this occasion, we're flying over from Germany our guest DJ, the one and only Alex Barck from Jazzanova.

We expect this one to be very busy so advance purchase of tickets is strongly advised.

Alex Barck’s rise to world fame was as a member of Jazzanova in the late 90’s. Also as the A&R manager at Berlin-based label Sonar Kollektiv he was, and still is, responsible for some of the finest ever releases, spanning the horizons from soulful beats to house, boogie, techno, jazz and beyond. He has played at almost every renowned club as the likes of Tokyo’s Yellow to Zouk in Singapore, Trouw in Amsterdam, Goa in Madrid, Dachkantine in Zurich, Plastic People in London, Electric Elephant Festival in Croatia, and of course the Berlin landmarks WMF, Cookies, Weekend, Watergate and Panorama Bar – just to name a few. He has also played alongside an endless list of luminaries including Francois K., Gilles Peterson, Norman Cook, Andrew Weatherall, Carl Craig and Basement Jaxx. As well as being a passionate, challenging and revolutionary DJ for over twenty years, Alex Barck has also worked as a selector, compiling several acclaimed and trendsetting series (Secret Love, Computer Incarnations, etc) and also hosts a number of radio shows on different German radio stations and is revered for his remix work.
Posted by What the devil is Soul Buggin? at 02:24 1 comment: 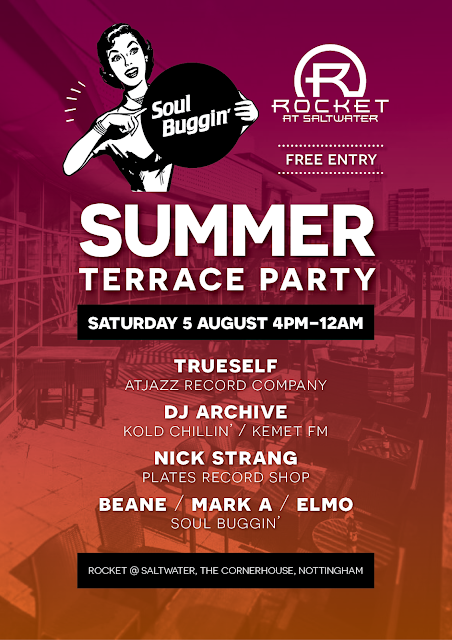 We’ve invited some fine selectors from this good city to join us on the decks too so expect everything from heavy boogie, firing disco, strung out soul jams, broken beat joints and chugging house sounds

Posted by What the devil is Soul Buggin? at 07:48 No comments:

Big love to The Lofthouse, Nottingham

We learned of some rather sad news recently that The Lofthouse has decided to close it’s doors. We were fortunate enough to put on 3 Soul Buggin’ parties at the venue (Dego / Ray Mang / Chris Duckenfield) and boy oh boy what parties they were. We’ve hosted events at quite a few places over the past 12 years or so but The Lofthouse felt very special to us, definitely had that warehouse type feel and in many respects reminded us our glory days at the much missed Moog bar when it came down to the magical vibe it created for our parties. We’ll have many warm memories of The Lofthouse as it was such a great venue where like minded souls could come, dance and escape the usual madness of the streets below. It will be greatly missed by us (and many of you we imagine) but we wish them well in their future endeavours. 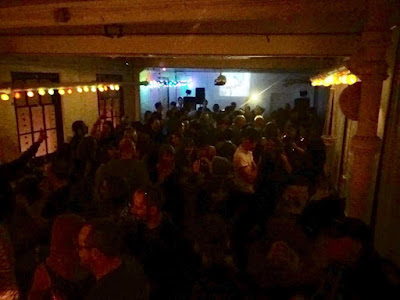 Our recent party was the very last night the venue played host to and as luck would have it we recorded it all.

You can listen to it over on our podcast page > www.soulbuggin.podomatic.com
Posted by What the devil is Soul Buggin? at 07:35 No comments:

Soul Buggin' returns to The Lofthouse on Saturday 3rd June for another intimate late night loft party in the centre of Nottingham and we’ve invited back one of our favourite selectors - the mighty Chris Duckenfield from Sheffield. 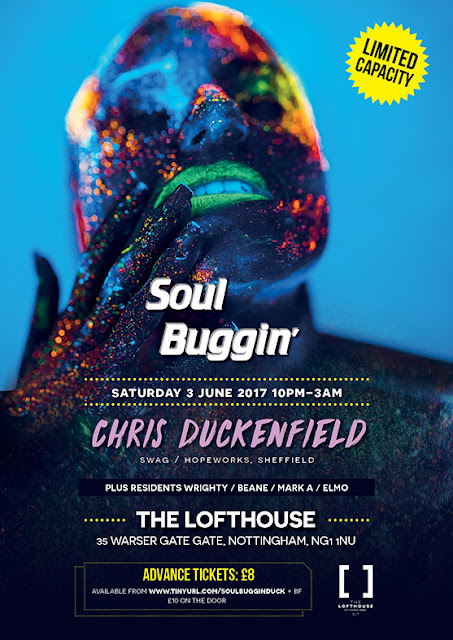 Please note this is a limited capacity venue, purchasing advance tickets is recommended. Our last event sold out in advance so we’d advise not leaving it too late

Chris Duckenfield has almost 3 decades of djing safely tucked under his belt that have seen him take in the underground warehouse parties of the late eighties, classic clubs like the Panorama Bar in Berlin, The Sub Club in Glasgow and The Electric Chair in Manchester as well as thundering cathedrals of rave in the form of London’s Fabric and Electric Elephant festival in Croatia, Chris Duckenfield has done it all. He was one half of the mighty Swag outfit, ran record labels Odori, Primitive and the more recent filthy disco imprint Popular Peoples Front and that’s not even mentioning the ‘ssssssh’ records he puts out. A firm favourite at Soul Buggin’, we can’t wait to have him back on our dance floor.

Posted by What the devil is Soul Buggin? at 09:08 No comments:

For our first party of 2017 we're returning back to one of our favourite venues in the centre of Nottingham - The Lofthouse - for a late night disco with special guest Ray Mang. Over the years many of Ray Mang’s productions have caused some memorable moments at our little wayward disco - from his work on 90's labels such as Nuphonic and the Idjut Boys U-Star and Noid imprints to his own Mangled label while not forgetting the countless remixes, reworks and edits he's put out that have lit up our dancefloor for artists such as Roxy Music, Rune Lindbaek, Daniel Baldelli, The Phenomenal Handclap Band, Los Amigos Invisibles vs Dimitri From Paris and so many more. As this venue has a limited capacity purchasing advance tickets is highly recommended

Posted by What the devil is Soul Buggin? at 13:01 No comments: