Ahead of our 10th Birthday party on the 27th September, Beane decides to take a misty-eyed trip down memory lane...

So 10 years eh. That sounds mad. It really doesn't feel like a decade has passed since I walked into Bar Humbug one Friday night a little worse for wear with a silly haircut and got offered a weekly dj residency along with my pint of strong lager (ah the good old days when dj work was given to you depending on how pissed/fucked up the manager was). 2004 was the year and that small back street bar down Friar Gate just opposite a well known drinking concentration camp cum sports bar we shall not name would become the first home of the night we fondly call Soul Buggin'. What began as a small weekly Friday night bar session began modestly as a bit of fun where people could come after work for a beer and banter. This was my first 'proper' Nottingham residency since moving to the city in 2000 and I went all guns blazing with the music back then. I can't believe it now but back in 2004 no disco got played at the session but just about everything else that had a soulful vibe coursing through it's veins got dropped and the name Soul Buggin' was soon dreamed up to tie in with the Bar Humbug name. The ball had started rolling. We were off. Nottingham now had a weekly alternative space to come and hear records that lets be honest, back then not many other bars and clubs at that time were giving the time of day. 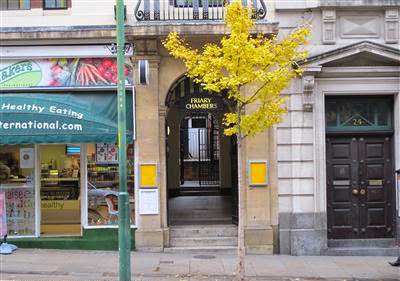 We ran for a good booze-fuelled year but the venue was suddenly sold and turned into a strip club (much to the City Councils disapproval I remember). Weirdly, I even carried on bravely running the night for one more week when the new lap dancing place opened, dropping Domu and Madlib records with gusto while the strippers flaunted their wares around me to bemused punters (some on a first date!) who still thought it was a normal bar. While it was erm, interesting to dj to scantily-clad ladies floating round the bar in high heels it had to be said that time had most definitely been called at Bar Humbug for Soul Buggin'.

After this calamitous episode I was left scratching my head a bit as to what to do next but I brushed myself off and with the sterling help of fine fellow local djs Wrighty and Mark we formed a collective that would take this 'Soul Buggin' mantle, lift it aloft our heads and venture bravely on to put nights on at a few venues across town over the next couple of years, namely The Snug Lounge and The Loft on Mansfield Road. These turned out to be nice little sessions in their own right but I remember it was when we moved to the Moog Bar in Radford things started to change.

People look back at the 3 years we spent at Moog with fond misty-eyed memories (those still with the brain cells to do so) and right they would be but as I sit here reminiscing on this blog it's worth pointing out the rave den we created once a month in that splendid rough-around-the-edges sauce haven came about not by pure accident. We started our sessions at Moog after a kind invite from owner Dave Kenny and began playing to pretty much one man and his dog (well, some of our mates did look canine-ish I guess) and it took at least a year to gain momentum. We could of quite easily packed it all in but we didn't. Part of this was down to our passion for playing records we loved and our stubborn-mindedness when it came to our music policy (at heart we are all big soul music fans and this would always be a constant theme in the nights), but also the vacant space Nottingham had for any kind of night that put this kind of music on a pedestal to a dancefloor. With the winding down of local debauched disco den Basement Boogaloo, there really was absolutely bugger all going on in this city that shoved the records we loved into the full glare of a disco ball. Of course there were similar sessions but not with the same musical vibe we were trying to lay down. It was time to up the ante, take our tops off and get busy with the dj bookings. As well as a fine array of local talent we began to book world class guest djs we admired and thought deserved to come back to Nottingham after many years away (or even make their first visit here). Not all were 'fashionable' in the fickle world of 'look he's made 2 records' dance music press but they were titans to us, DJs and producers who didn't count their careers in years but in decades. 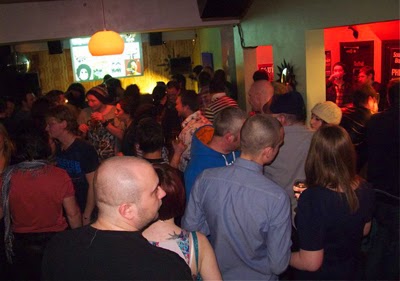 We were graced with all manner of musical royalty throughout the Moog years from the likes of Ashley Beedle, Phil Asher, Colin Curtis, Simbad, Horse Meat Disco, Domu, Kev Beadle, Deep Space Orchestra, Atjazz, Benji B, Al Kent, Chris Duckenfield, Mudd, Luke Unambomber, Flash Atkins, Bill Brewster and so many more (while not forgetting the cream of the crop of Nottingham's finest local spinners, far too many too mention here). Our tenure at arguably one of the finest rave pubs Nottingham had ever seen ended in an almighty new years eve all nighter that went on till 6am complete with several rewinds and cries of 'one more'. I even got on the microphone at the end for a slightly tearful garbled farewell. I can tell you now I have no memory of walking out of that place as the blazing sunshine filtered through the curtains and I wouldn't of wanted it any other way. It was a fitting farewell and I have hours and hours of nothing but the very warmest memories stored in my bonce of Moog. It will always inhabit a special place in my heart.

With no Moog suddenly came massive dramas in the dance. What were we going to do?! It had been a monthly staple in our lives for the past 3 years. What had started with a couple of mates coming down to see us to spill their pints over the decks had ended with almost 200 people going absolutely batshit and we realised we actually had a bit of following on our hands. We thought long and hard about what to do and where to take our party (and even got a few offers and enquires from venues which was very nice) but finally settled on The Bodega, a great live music venue that ticked a lot of the boxes we wanted ticking. Of course it was natural for every arm chair promoter and punter who goes out once a year to step forth with an opinion on our choice of dancefloor but what was important to us was that it felt right for the party. From our opening easter throwdown with Faze Action and Leftside Wobble we went on over the next few years to bring stellar spinners Recloose, Andrew Weatherall, Joey Negro, Maurice Fulton, Dego, Crazy P, Paul 'Trouble' Anderson, Lucy Locket and loads more to our little stage while not forgetting to put on a couple of fine new years eve parties to accompany the monthly sessions (around the corner at The Old Angel Pub). 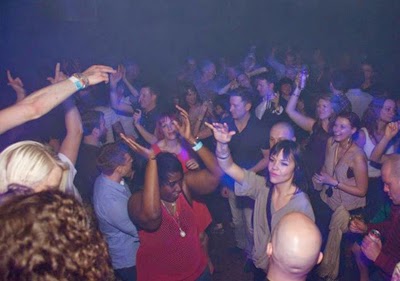 We now suddenly find ourselves in 2014, blinking a little bit bewildered into the disco ball, a bit like Marty McFly as if he's suddenly been thrust 10 years into the future in a nano second. It certainly feels like it's gone that quick.

As we stand on the brink of our 10th birthday party I don't think any of us realised we would reach double figures. The road has been long and stressful at times but above all hugely enjoyable. This ride has been a lot of fun and we've been lucky enough to meet and play alongside some of our favourite djs, been introduced to fantastic new friends and kindred souls on the dance floor, had the opportunity to travel and play at different parties and best of all woke up the next day with the biggest of smiles on our faces. Will we still be going in another ten years? My head says 'don't be silly' but my heart says 'why not?' We're not exactly spring chickens now but the records we love and play are sometimes even older. Timeless infact. Whatever the future holds for Soul Buggin' I'd like to take this opportunity to thank all who have supported us in reaching our 10th birthday; my fellow residents Wrighty and Mark who have been amazing partners on this journey, the guest djs, the venue owners, the managers, agents, cleaners, kebab shop men, taxi drivers - while not forgetting the most important people of all - you, the dancers, movers and shakers. You are the party. And as long as you keep getting down we'll keep throwing it down.