Warming up for big birthday scenes...

Down at Soul Buggin' so far this year we've been blessed with some cracking sessions that have seen the likes of Maurice Fulton, Chris Duckenfield, Phil Asher, Joey Negro and Sam Redmore grace our decks. With great crowds, superb vibes and all round top notch music going down we still have to pinch ourselves that we're only in July. Those heads that reside in Nottingham will no doubt realise that now sun has beamed down it's lovely warm rays on us all this fine city quietens down for the summer as all the students bugger off back to mum and dads and us older folk go on holiday so we've decided to take a short break to recharge our batteries, refocus and start planning for the autumn and what a party we've got for you when we return. 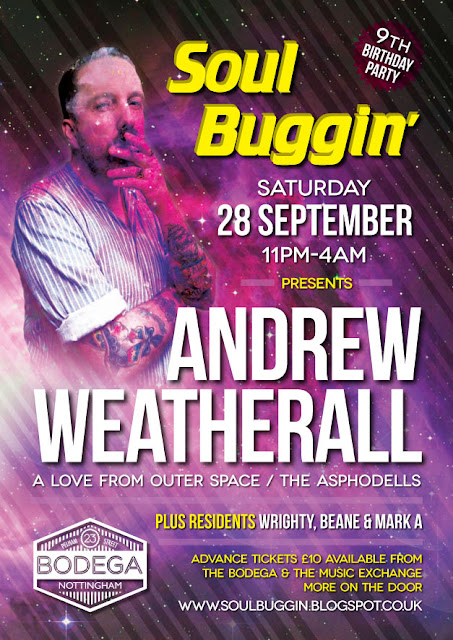 Diaries at the ready, get the babysitters number quick, cancel everything. On Saturday 28th September we'll be returning to The Bodega in Nottingham to have a big old dance for our 9th birthday and to help us raise a glass we're very excited to announce that we've invited Andrew Weatherall to join us. To say that we're a little excited about this is a rather large understatement indeed so we hope that you can join us to celebrate. Normally on this blog we'd like to give you a run down of our guest djs history, discography, jaunts and warehouse adventures but with some people their legacy is so damn long we literally wouldn't know where to start. Andrew Weatherall is one such character. Whether it be in the form of a dj or producer he is one of the most well respected talents within the scene so it is with a great honour that he will be bestowing his sonic wonders onto our dancefloor.

The buzz on this one has been bubbling for a few weeks to the point that all the early bird cheap tickets we announced via our facebook page have now sold out before we even started to advertise this party. If you missed out on the first batch of tickets released then worry not, full price £10 tickets are now available to buy directly from The Bodega or The Music Exchange on Stoney Street and we strongly advise you purchase some.

As per usual the Soul Buggin' residents Wrighty, Beane and Mark A will be on warm up duties as we open the doors at 11pm and go through till 4am.

Well what do you know - it looks like summer's finally gone and turned up. We were getting a bit worried if truth be told but now the buggers arrived its time to get your alfresco face on. Here at Soul Buggin' towers we're planning on throwing an outdoor all day terrace party up at Rocket @ Saltwater. Kicking things off around 4pm we'll be pumping on through till around 2ish and we've invited down dirty old grizzlers Basement Boogaloo to bring the disco filth. It's a free session all day and children are welcome till 7pm so no excuse for the mums and dads who get loose. 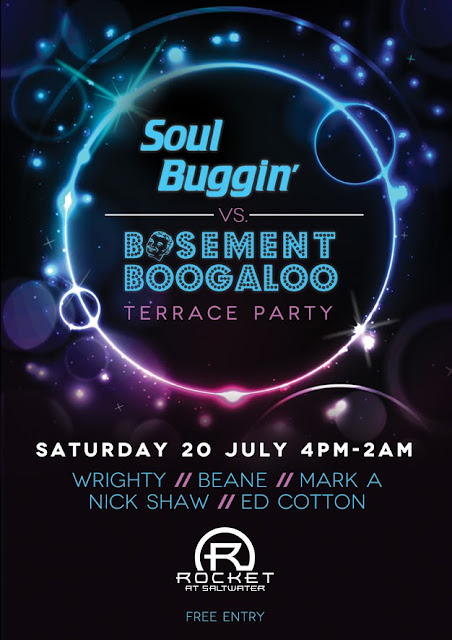 The terrace at Saltwater is one of the nicest outdoor spots in the city. It's not just us who think so, those swanky guardian people think so too http://www.guardian.co.uk/travel/2008/aug/07/uk.bars

As for our monthly sessions at The Bodega, we'll be taking a short 2 month break for the summer but we'll be back all guns blazing in September.
Posted by What the devil is Soul Buggin? at 10:23 No comments: