Sweaty arsed disco antics down at the Buggin' last month then or what!? Woooooah. We knew Bill Brewster was a legend and would not disappoint but nothing could of prepared us for that beast of a session. Arguably our busiest little knees up in Moog we were truly knocked for six the amount of people that showed up and we gotta say what a fantastic crowd you lot were. Big ups to everyone of you that got on those floorboards for the stomp and of course a very special thank you to Bill Brewster who turned in a fantastic 2 hour set consisting of bomb after bomb. It was getting silly at one point and very hot in there but when he played the Harvey Black Cock edit of The Dells "No way back" that was it for me I needed a sit down. Too much heat! 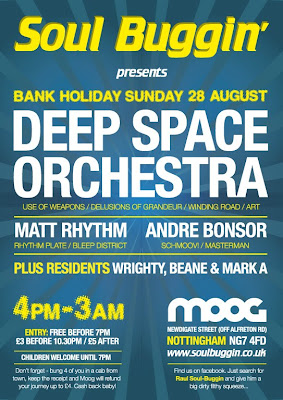 So where the bejesus do we go from there then!? Well before we even get to our big birthday bash next month we've got the small matter of our annual August bank holiday all dayer to get over first which takes place back at Moog on Sunday 28th August. You know the deal by now - we kick off at 4pm and go right through till 3am and this month we've asked some of our favourite djs to come and join us. Headlining the party we have the Deep Space Orchestra who are a fine DJ/production duo from Manchester who we were lucky to play with earlier this year at the Disconnected warehouse party and they blew our socks off. They both have serious skills behind the decks and with a whole host of their own productions released on labels such as Winding Road, Art, Five20East and their own Use of Weapons imprint they certainly know their onions.

Joining the duo will be two local guest DJs Matt Rhythm from the Bleep District / Rhythm Plate duo and local party fiend Andre Bonsor, best known for not only his marathon levels of party endurance but his stellar work as one half of Schmoov! and Master Man.

Musical back up will be supplied by the Soul Buggin' residents Wrighty, some monkey with a bag full of beans and Derby warlord Mark A.

As we kick off so early you'll be able to get in free if you come down before 7pm (worth it to grab some of Moog's lovely munch) or after it'll be £3 entry before 10.30pm and £5 after.

We look forward to having a boogie with yer!