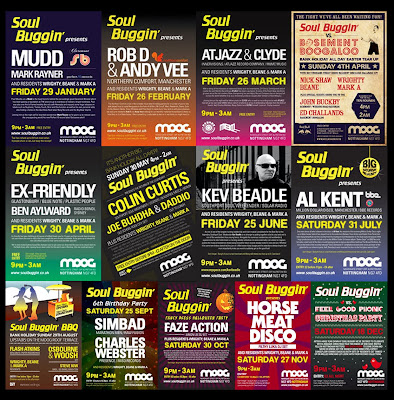 So is it really that time already?! I dunno about you lot but 2010 has flown by in a flash for me and I can't quite believe we've reached the end of the year in one piece but just one look outside at 'snow-carnage Britain' and its well and truly confirmed - we're most definitely knee deep in December. It is at this time of the year where I like to take a moment to look back at the previous 12 months and take a moment to collect my thoughts on all the parties, music, adventures, good times and reflect on just what the devil happened in 2010.

Our humble little Soul Buggin' night has, on reflection, had a pretty belting year all in all clocking in a total of 12 parties (with one more to go before the years out) that has seen some firing dj sets, amazing dancefloor scenes and plenty of all round tom foolery down at the Moog bar. We kicked it all off back in deepest darkest January with three friday night parties in succession with Paul "Mudd" Murphy and Mark Rayner, the Northern Comfort guys from Manchester in February and Derby heads Atjazz & Clyde in March (streamed live over the net via webcam too).

Before we knew it we had wrestled our way out of the winter and spring was upon us so we decided to throw an all dayer on Easter Sunday and invited over Basement Boogaloo's Nick Shaw as well as John Buckby and Ed Challands for a big dust up. Unfortunately 'the sarg' Shaw couldn't make it (personally I still think he bottled it) but alas the night was a monster with a dancefloor going for it at 9pm which is pretty unheard of in Moog and didn't stop until I attempted to clear the floor with the Fania Allstars.

We thought one party in April wasn't enough so come the end of the month we asked local lad Ex-Friendly to pop on down with back up from Nottingham lad Ben Aylward who was over from Australia for a few weeks where he now resides.

As May opened up us Soul Buggers were asked to DJ at the Nottingham Bar and Club Awards in the Pitcher and Piano alongside local web radio extraordinaire Alex Traska and special guests The Cuban Brothers. It was mighty strange DJing in a massive church but we made an occasion of it and donned our best threads and gave it to em inbetween the eyes, well kind of. Anyway, for some reason that still dumbfounds us we ended up coming third in the 'Best Independent Club Night' category which considering we're a small night that plays old fogey disco music to a predominately older crowd wasn't half bad when you look at some of the nights we were up against. Thank you all for those that voted!

With an extra spring in our step all eyes were now on our next bank holiday party at the end of May with Colin Curtis (his 2nd appearance for Soul Buggin'), Joe Buhdha and Daddio. We thought we might have a busy one on our hands after the previous Septembers scenes when Colin last came to town and we weren't wrong either. A fantastic all dayer with a superb crowd in attendance.

Come June we'd reached the half way mark of the year and had been thinking of moving our night to Saturdays as many folk were complaining they couldn't always come down due to work commitments etc so we thought why not as it made sense after all. Before all that though we wanted to go out with a bang on a Friday so we asked over Kev Beadle to come down to Moog and send us off in style and boy what a night. Seeing Mikey slapping the ceiling to Kyle Hall on the dancefloor at the end will be an image that will stay with me for a long time!

So after the decision to move the night to a Saturday had now been taken we thought sod it lets go full on disco for this one and who better to ask to provide the soundtrack than the Million Dollar Disco don himself Mr Al Kent. After a very long journey down from Scotland Al turned in a firing set and reminded us all why we really need to get up there to one of his own nights in the new year. Absolute fire.

With England's world cup campaign well and truly sodded up and now left in the shadows we turned our attention to the August bank holiday which was normally the time of year where Basement Boogaloo throw a massive party but as they'd all buggered off down south we thought we'd be cheeky and go for broke - could we turn in a THIRD storming bank holiday all dayer? We bloody well could and plans were put in motion for a rooftop BBQ with DiY nutters Osbourne & Woosh, Paperecordings head honcho Flash Atkins and balearic nutters Steve KIW and Dave Pickering. Right on cue the weather decided to balls it right up for us with crazy gale-style winds so we moved it all inside but that didn't seem to stop folks getting on the good foot. It got pretty messy but hey this was the last bank holiday of the year!

For September we thought as it's our birthday let's put on something special and we were dead chuffed when Simbad and Charles Webster both came down to rock the Moog turning in a fine back-to-back 3.5 hour set. It was proper ace and one of my favourite sessions of the year! I'd love to do some more back-to-back style sets in 2011!

The nights had now begun to get very dark and with halloween soon on our doorstep we threw caution to the wind and threw a fancy dress disco and invited Faze Action's Simon Lee over for the craic. With some very odd nutters descend on the joint (with my fave being that freak Ady in a dress) the night proved a bit of a belter.

November had been a pretty big month last year if you remember as we had previously had Benji B over from BBC Radio One so we thought we'd keep it large and welcome down Filthy Luka from the Horse Meat Disco collective. With a crazy turn out which in turn created some fantastic dancefloor scenes this one had to be one of the best sessions of the year for us and believe me, we've had some bloody good ones. 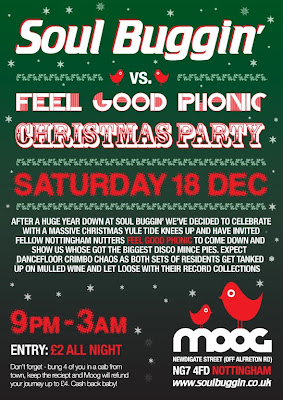 So 12 parties under out belt and 2010 is about to wave goodbye but hold on to your hats we ain't done yet. Saturday 18th December is our final shindig where we will no doubt be swishing about full of mulled wine and cider to celebrate not only Christmas but the past 12 months I guess. We'll be keeping it on a residents tip for this one but have also invited the guys from Feel Good Phonic to come down and throw some disco mince pies about. With a cheaper door entry of £2 it all kicks off at 9pm and goes on till god knows when this one should be a right laugh so come on down and raise a glass of Christmas cheer with us.

I'd just like to say, on behalf of all three of us I guess, many thanks to all our guest DJs, dancers, drinkers and droogs that came down to the Buggin' in 2010 and shook it all about. We've had a fantastic year and have some great plans for 2011 and we'd love you all to join us again.

To hear all of my tunes of 2010 I'll be doing a special 3 hour radioshow on Sunday 19th December (1pm-4pm) over on www.myhouse-yourhouse.net
Posted by What the devil is Soul Buggin? at 06:37 No comments: