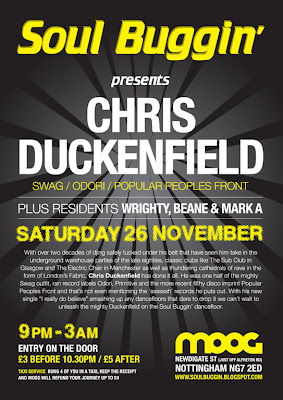 Chris Duckenfield last played in Nottingham a few years back now and as Soul Buggin' has slowly grown quietly into one of Nottinghams best kept secret late night discos we thought it was about time to invite the Swag man to the little rave pub we call Moog on Saturday 26th November.

With over two decades of djing safely tucked under his belt that have seen him take in the underground warehouse parties of the late eighties, classic clubs like The Sub Club in Glasgow and The Electric Chair in Manchester as well as thundering cathedrals of rave in the form of London’s Fabric, Chris Duckenfield has done it all. He was one half of the mighty Swag outfit, ran record labels Odori, Primitive and the more recent filthy disco imprint Popular Peoples Front and that’s not even mentioning the ‘ssssssh’ records he puts out. With his new single “I really do believe” smashing up any dancefloors that dare to drop it we can’t wait to unleash the mighty Duckenfield on the Soul Buggin’ floorboards.

Check out Chris' website for loads of mixes to warm you up www.chrisduckenfield.com 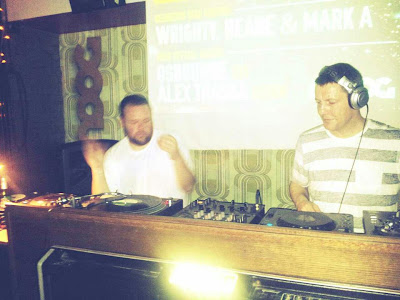 Last Saturday the Kat Records crew came to town to lay it down and ruddy nora did they bring the party. Phat Phil Cooper and Ste Hodge hadn't been to Nottingham for a good few years so they were pumped up good and proper for this one - so much so Mr Cooper even brought his own mic to Moog to smash up the dance. Special edits, anthems, classics and party bombs were all thrown down and by the time "I am the black gold of the sun" dropped near the end I was nearly on my knees. Tops stuff from the boys. Massive thanks to all those that came down and of course to the boys who created a great party.
Posted by What the devil is Soul Buggin? at 15:19 No comments: